Russell Young was born in Northern England in 1960. From an early age he was powerfully drawn to the idealized drama of the American dream. He studied film, drawing, photography and graphic design. After college he moved London. He started taking photographs at the live club shows of Bauhaus, R.E.M. and the Smiths. In 1986, he shot the iconic ‘Faith’ sleeve for George Michael.

Well known for his bold, iconic, silkscreen paintings of pop imagery turned upon themselves to explore the nature of the American counter culture as seen through the eyes of young boy growing up in Northern England, his bold ground breaking screen print renditions present a visual journey that bares witness to both the excess and ambition that has helped shape the American Dream. 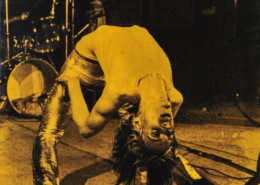