While Basquiat was a graffiti artist early in life, tagging the grubby streets of late 70s Manhattan with cryptic poems, he preferred not to be introduced that way. It was yet another symptom of being a black artist in a white artist’s world.

In the biopic Basquiat, wealthy white art collectors descend into an underground studio to watch the young, black painter at work. Basquiat hunches over his canvases, hair wild and face paint–splattered.

The onlookers are rapt with the spectacle, almost like colonizers watching a noble savage perform miracles. The scene resembles a zoo exhibit just enough to make one cringe. 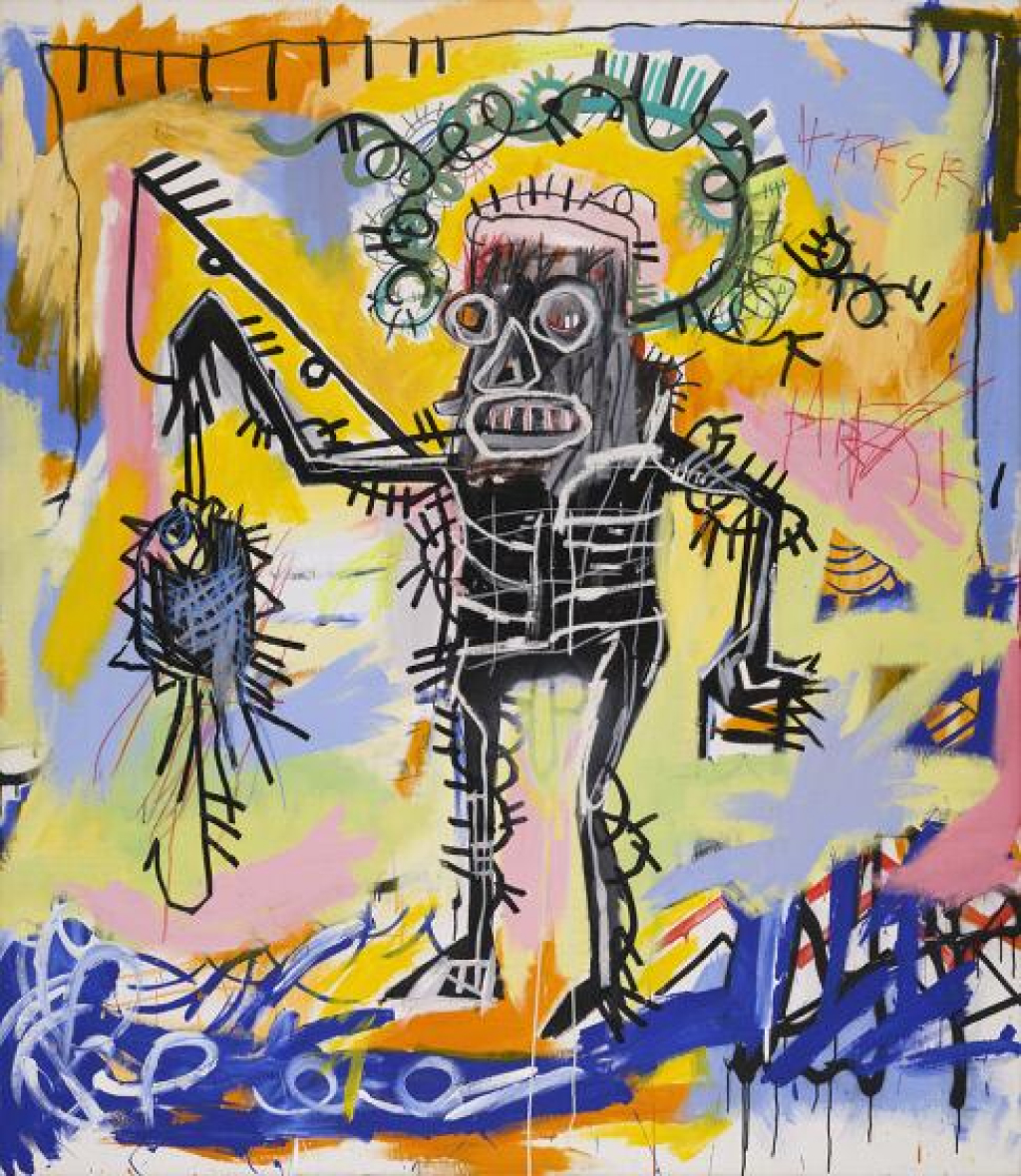 How The World Saw Basquiat’s Paintings

In reality, art critics like to write that he was painting in a “basement.” Basquiat pointed out in an interview that they would simply call him an Artist-In-Residence if he were white. So too, they might have called him a street art poet instead of a graffiti artist. The list goes on.

That characterization seemed natural to the art world of the 70s, maybe for no better reason than it echoed centuries of deeply-ingrained racism. Plus there were the capitalistic benefits of creating hype around a ghetto boy endowed with visionary talent.

However, Basquiat wasn’t the uncultured “voice of the gutter” the media portrayed him to be. He received a private education and spoke three languages fluently. His knowledge of art history and academics at large was deep. Often his studio was littered with open volumes around his half-finished works.

In any case, the art world was on the mark in one respect–the man was fascinating. This article takes a deeper look at the stories surrounding Basquiat’s graffiti, painting, and other artworks. Basquiat’s graffiti was often cryptic and poetic. Watch the video below of a young Basquiat tagging the city under the name SAMO, the graffiti duo which helped bring recognition to the young artist.

Basquiat and Diaz created the moniker “SAMO” during a stoned conversation, calling the weed they smoked “the same old crap.” They eventually shortened the phrase to “Same Old” and eventually “SAMO”.

In interviews, art critics often tried to attribute lofty meanings to a particular figure or symbol. Basquiat often replied by saying things like, “No, it’s just a belt buckle” or “I just felt like painting a skull.” So it might be best to take a simple approach to interpreting his mysterious texts. Maybe he wrote “Braille teeth” as a socio-political comment on the blind, carnivorous world. Maybe he just wrote it because he hadn’t brushed all day and his teeth felt a little bumpy on his tongue.

One reason why his street art texts tend to be wildly cryptic is that he was often stoned when writing them. The mind turns into an untamed animal that Basquiat had no desire to saddle for the sake of his readers.

In this way, he reflects the self-assured mind of an artistic genius. His expression was pure, untainted by the desire to please or be understood. And all the while his ambition craved recognition.

The Big Money All

Crushed Into These Feet”

Without a doubt, this text has a pointed meaning behind it. The story goes that Basquiat was in front of a fine art exhibition, still young and undiscovered, and very much the outsider looking in.

The biopic Basquiat interprets the text as an expression of frustration against the racial forces that made his rise to the top especially difficult. Though he came from the middle class, his life in Manhattan was certainly that of the starved artist. ‘I’ve never been to Africa. I’m an artist who has been influenced by his New York environment. But I have a cultural memory. I don’t need to look for it; it exists. It’s over there, in Africa. That doesn’t mean I have to go live there. Our cultural memory follows us everywhere, wherever you live.’

A griot was a member of a class of traveling poets, musicians, and storytellers who maintain a tradition of oral history in parts of West Africa. Without a doubt, Basquiat saw himself as a griot of Manhattan.

The Basquiat painting below, completed on a series of wooden slats, represents a strong dose of his graffiti background in his mainstream pieces.

Like Picasso, the young artist believed that “people’s magic and strength rubbed off on the things they wrought”. In this case, the Gold Griot represents alchemy spread over wood and paint.

It tells the story of Basquiat’s cultural memory of his ancestral heritage, transplanted into a post-slavery world. Most likely, it is the image of an Ejagham Nnimm woman from Cambodia or Nigeria.

The Ejagham people disproved the myth that African tribes did not have a written history, as they developed a system of ideographic writing. Basquiat’s knowledge of this came from his extensive reading, and he was certain to have loved this fact enough to create an alchemical talisman of it. 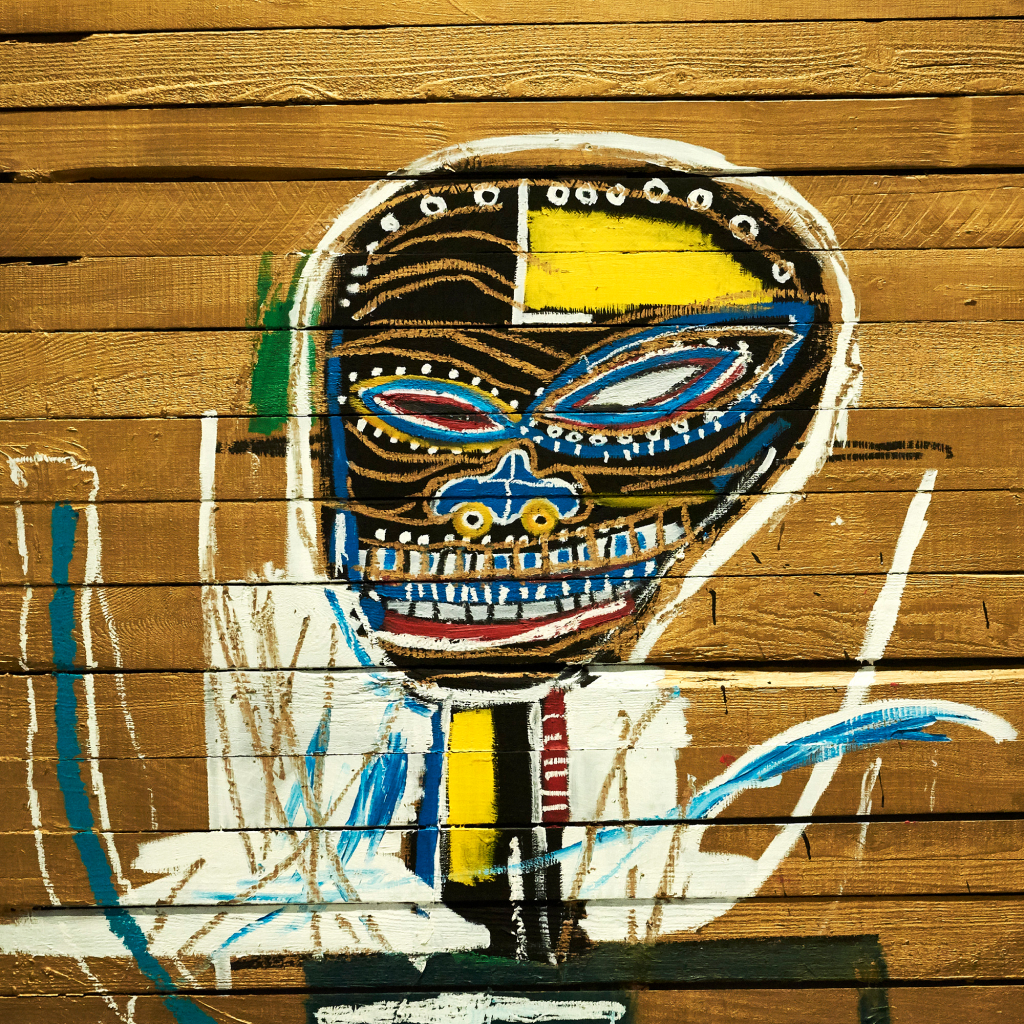 Hamilton Selway provides high-quality screenprints of important Basquiat paintings. Currently we offer 50 Cent Piece, Phooey, and Jawbone of an Ass. At the time of this writing, all our editions are signed and stamped by the Basquiat estate.

Please click the links above to view the artworks and inquire about these pieces. Keep scrolling to discover more of the visionary and legendary paintings by Basquiat.