Not philosophically as one might assume. But Mao was Warhol’s first new image of the 1970’s. His work corresponded with Nixon’s historic trip to China. In the 1960’s much of Andy Warhol’s print work was reproductions of his own paintings which had been done many years earlier.

The prints and the painting of Mao appeared the same year. More notably Mao was the first appearance of the hand drawn line that would grace so much of Warhol’s later work. When asked about it he said he wanted more “style” in his work.

Andy Warhol based his painting, followed by 10 screen prints on a photo that was illustrated on the publication Quotations from the Chairman Mao Zedong. Warhol was commissioned for other work related to Mao. That work is not featured here and was a departure from his normal mediums. (Xerox images of his own Mao prints. One example is Mao(IIa.89). Warhol never commented on his work directly. But this was also the first truly political piece Warhol produced. His somewhat satirical look at American consumerism followed by a political piece proceeding the height of the cold war in the 1980’s. It makes you wonder. 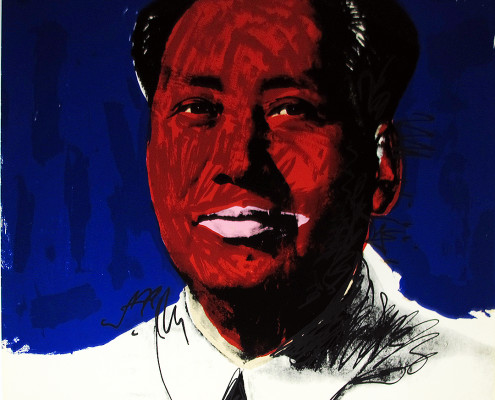