It’s easy to round up a collection of interesting facts about Mr. Brainwash, the French-born, US-based street and installation artist who gained fame in 2008 under the auspices of Banksy. Rumors persist that the master-of-shadows street artist Banksy is also the puppet-master behind virtually all of MBW’s success, although they are no longer mainstream opinion.

While people have drawn many comparisons between Banksy and his protégé, there are at least two major differences. The first is his out-in-the-open public persona. The second is the content of his art, especially in terms of text. His pieces often showcase generic, but positive thoughts like “Follow your dreams” or “Life is beautiful” or “Never never give up”. An Installation of Street Art by Mr. Brainwash

The foundation of his work is the idea that everything is possible, which the artist elaborated upon during an interview:

“Art has no walls. Anybody can be an artist. Art has no rules. There’s no manual.”

With that in mind, let’s continue to the top interesting facts about Mr. Brainwash.

1. Mr. Brainwash made his entrance with Exit Through The Gift Shop.

Banksy based his tongue-in-cheek documentary Exit Through The Gift Shop on Thierry Guetta, and the publicity spring-boarded the relatively unknown filmmaker to commercial success, predominantly for Neo-Post-Pop-Art paintings and street art.

2. Even artists close to him have criticized his art.

All artists receive criticism for their work, especially street artists and Pop artists. So it’s no surprise that Thierry Guetta has been the subject of unsavory reviews. What makes these critiques unique is their sources. For example, Shepard Fairey, the artist behind the Obama Hope poster and connection between Banksy and MBW, has strong, but balanced opinions on the artist.

During an interview just outside a MBW exhbition, he said “I want to hug him one second and smack him the next.” and “I love the guy i just don’t love his art. I never thought of pop-art as a bad thing until Thierry started doing his thing. But I do appreciate his passion. His drive. I just wish there was something to it other than just the excitement of ‘I got some attention.’”

In Exit Through the Gift Shop, Banksy remarks: “It was at this point I realised that [Guetta] maybe wasn’t really a filmmaker. That he was maybe just someone with mental problems who happened to have a camera.”

3. MBW is a self-proclaimed novice on the art world.

For instance, does he read art magazines?

When asked if he reads art magazines or visits exhibitions, the artist declined absolutely on both accounts. The Daily Beast reported him saying,

“I don’t look at people, what they do–I am completely outside of the art world. I know a couple of names—Damien Hirst, Jeff Koons. But I don’t know anything. I have my own little world.” MBW features famed musical artists like The Beatles in much of his art.

4. He has created the album artwork for major musical artists.

6. Like the Kardashians, he’s not even a little camera shy.

In fact it’s just the opposite. When he lived in LA before his big break, he filmed a short season of his life—every moment of every day. He also agrees to numerous interviews.

In addition to the Banksy documentary, he’s also been the subject of an episode of the Morgan Spurlock-produced documentary series A Day in the Life. The footage shows MBW preparing for an exhibit in LA. One interesting fact about Mr. Brainwash’s episode is that he reveals that a team of graphic designers has contributed to all of his work since 2008, when he was the subject of Exit Through The Gift Shop. 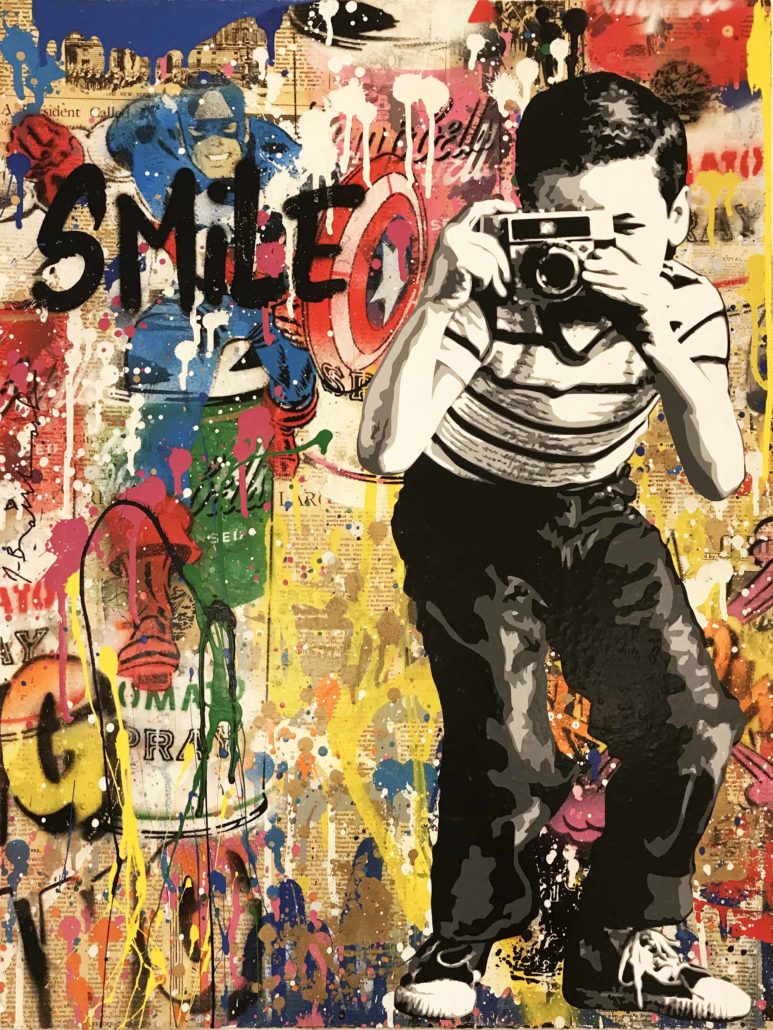 The murals appeared on the side of the Century 21 department store across from the WTC site. He made the first in 2014, the second in 2015.

8. He’s returned—to some degree—to his initial vocation as a filmmaker.

MBW directed a video for “Divine Sorrow” by Wyclef Jean, which featured the renowned DJ Avicii. It promoted Coca-Cola and the (RED) campaign. which supports efforts to educate people about the transmission of HIV from mothers to their infants in order to help eliminate the spread of the tragic disease. Life is Beatiful was the inaugural exhibition that granted Mr. Brainwash his fame.

10. The controversy rages on.

Since his debut, many have questioned to what degree MBW is merely a Banksy-generated Banksy copycat. The resemblance between the artists is uncanny, although many agree that MBW pieces tend to appear significantly less authentic than their Banksy counterparts.

An LA Times investigation found “[the] details of Guetta’s unlikely biography are broadly supported by a review of public records, which trace his life in Los Angeles from his arrival as a teenager in the early 1980s. They are also consistent with the accounts of friends, former business associates and employees over those years.”[39] Subsequent investigations have found that many details of his life as presented in the documentary are verifiably true.

However, the report mentions that “It is impossible to prove whether his latest incarnation, Mr. Brainwash, is sincere. The film suggests that Guetta’s artistic alter ego is largely a creation of Banksy, a notion Guetta doesn’t refute.” Guetta himself spoke to the issue, saying “In the end, I became [Banksy’s] biggest work of art.”[39]

This has been 10 interesting facts about Mr. Brainwash. For more roundups on prominent artists, check out these recommended articles: