Andy Warhol Quotes are like excuses – Everyone has one

Andy Warhols most unforgettable quotes is our personal list of Warholisms that we simply find ourselves repeating. We are not claiming that the quotes images or anything else in this blog post is original. Like Warhol himself, we’re comfortable finding things we like and presenting them through OUR lens. Edie Sedgwick “The girl of the year” in 1965 was dead by 1971. There is no one better to frame Andy Warhol’s most famous quote  “In the future, we will all be famous for 15 minutes“. Andy Warhol himself changed this quote many times over the years. It first appeared as “in the future, everyone will be world-famous for 15 minutes” on a program for a 1968 exhibition at the Moderna Museet in Stockholm, Sweden. While the second unforgettable Andy Warhol Quote is superimposed on one of his most unforgettable works I’m betting a little history will make this quote more relevant.  The original “soup cans” series which was owned for some time by a gallery owner in California. The collection sold at a discount for $16 MILLION.  That was 10 years ago. The “Soup cans” collection would easily command a 100 MILLION dollar price tag in 2017.

Andy’s first home-run in the art world epitomizes the quote we superimposed.

Are these Andy Warhol quotes as meaningful to YOU as they are to us?

Andy Warhol photographed shoe’s, people, postcards and hundreds of everyday mundane items. When he died he left behind BUILDINGS of memorabilia. I think perhaps he was always looking for and finding the beauty in everyday things. No better way to provide an omage than place this Warhol quote on a polaroid of the artist himself. This Polaroid taken By Andy Warhol’s assistant at the time capture in deed and spirit a true artist. 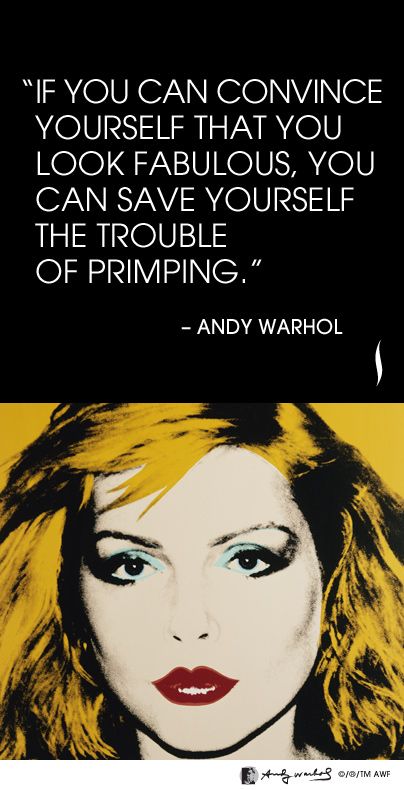 Another Home run from Sephora. It’s like Andy Warhol was a commercial artist and made these images specifically with big brands in mind 😛

The last of Warhols Unforgettable Quotes

Finally, we are going to let you guess which of these images is the MOST VIRAL ANDY WARHOL QUOTE and which we made ourselves. Leave your guess in the comments and we’ll be sure to EMAIL you the answer and OUR original Andy Warhol meme. No second place prize. Andy Warhol was obsessed with Marilyn Monroe by the time he was 13. He would later take photos in drag looking an awful lot like Marilyn. Jean-Michel Basquiat: The Rise and Fall
Scroll to top